Willy and the Planks. Remember that name, that odd in a way sounding name for a bluesy-bunch-of-back-woods-front-porch Juke Joint Blues geniuses. This was the first time I ever laid ears on them, and I was sprung wide open to more of their bust down the doors, now get-real and rowdy music. Their self-titled album is blood boiling music, if you haven’t felt your toes in a while, well- they’ll start tapping, your knees will get in on it too and before long, you’ll be jiving; kind of naughty and nice like. There is nothing like risking life and limb driving the Mass turn pike, but with Willy and the Planks blaring, raw and electrifying- before you know it you’ll be cruising and brother.

Willy Gibbs (Guitar), Mark Noble (Vocal/Bass), and Chris Gibbs (Drums) are the fresh air that the blues has been needing – well thought out lyrics, refreshing energy. The amount of music coming out of only 3 instruments is quite amazing, and I was quite impressed that their energy shone through on a studio album. If you like your blues delivered with swampy blues-rock sweat, Mississippi roots and music that rolls in like the Appalachian Mountains, you are going to embrace Willy and the Planks with open arms.

Right from the beginning, as the album opens up with “KEEP YOUR HANDS OFF HER”, you know you are getting the real deal here. Cacophonous, moody, soulful and compelling. One of the year’s best, straight from the roots of the blues to your ears. The quality of the songs is subordinate to the desire to whip it up, because blues and boogie is mostly about atmosphere.

Hence, special praise for the sound, which seems to have bypassed all the desire of engineers and producers to ‘clean things up’. I became a convert literally upon hearing the first two cuts of this album. It’s powerful, raw, with attitude and deep, deep groove.

By the time you hit the third track, “MISS MAYBELLE”, it’s obvious that Willy and the Planks have got serious pedigree but that only gets you so far; you still have to prove you’ve got something to say, and it needs to be said well. “YOU GOT ME CRYIN” does just that, both vocally and musically. Mark’s vocals, Willy’s brilliant guitar and Chris’ drum groove may cause you to keep hitting the “repeat” button.

But, actually, the same can be said about the entire album. I was instantly struck by their authenticity and how they yank that soulful blues vibe kicking and screaming into the 21st century.  “LONELY TOWN LONELY STREETS” and “I FEEL GOOD, LITTLE GIRL” is the perfect medium for the talents of Willy and the Planks as the songs provides an opportunity for each of the band members to do what they do best – inject energy and mood into their music with as much passion as they can deliver.

Most significant is their ability to project live sound groove and energy into their studio recordings, as can be heard on “SEE THAT MY GRAVE IS KEPT CLEAN”, with complete mastery of their instruments and vocals. Like the old blues-men who preceded them, Willy and the Planks never forget where they come from. They walk the blues road holding their roots firmly in hand while following their art and passion into new, uncharted territory.

Tweet
InSEE THAT MY GRAVE IS KEPT CLEAN, Willy and the Planks 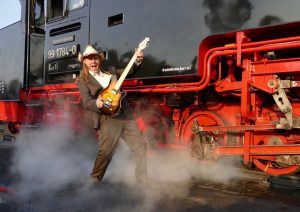