The focus on the personal and the expressive on her EP, “FINELINES”, co-written and produced with Abigail Knudson (MISSY), has Ukrainian born, now Auckland based pop artist, VÏKÆ, reflecting on the essential roles she inhabits as a woman, a performer, and a human. Past to present, she scours her transition from darker places in her life, to a level of self-discovery and empowerment. “This EP outlines all the struggles that I have had during my diagnoses with mental and physical illnesses, and how they have really changed my life,” explains VÏKÆ.

Throughout the EP, which includes the already-released, stream-garnering singles “Rumours”, “Truth” and “Finelines”, VÏKÆ’s voice moves with sleek power, from delicate operatic acrobatics to muscular pop, and introspective intimacy.

It is also bracingly frank, spitting out powerful poetic narratives that are carried by infinitely weaving melodies. She has the mystique of the enigmatic Avant-pop chanteuse and should afforded all the fascination normally afforded to artists of such caliber.

Right from the opening track “#fakefriends”, VÏKÆ’s cadence is so fluid, airy and hypnotic that she is able to harmonize with the beat, in a way that would be well outside the range of most pop stars. She manages the equilibrium of an otherworldly voice and her most human endurances. 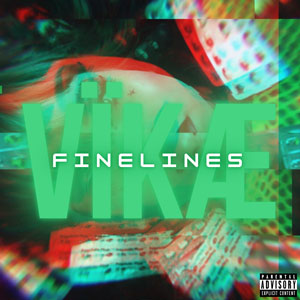 VÏKÆ has clearly met her fair share of pain, both emotional and physical, and she is not afraid to unpack her baggage on this EP. On “Truth”, which looks at her mental struggles, she manages to create an addictive melody and hook, against the sometimes abstract future sounds infused into the rumbling bass-driven production. You can hear her uncanny vocal ability come alive as she ascends into the chorus.

“Rumours” is a catchy and stunning single, which many of us may have already heard, and loved a few months back. The song, which deals with bullying created in toxic friendships and peer groups, is born out of VÏKÆ’s own experiences living with trauma and physical limitations. Here refines her artistry into a dynamic, theatrical pop masterwork, in which she takes center stage.

Next up is VÏKÆ’s personal favorite track on the EP, entitled “Virus”. In a recent interview she explained why: “This song really is the most intimate on the record. It’s got more hidden meanings than any other track on this record, secondary to ‘Finelines’, and is possibly the most emotional to sing.” All of which sounds incredible, considering how singalong catchy the mid-tempo chorus is. When she refers to the meanings being hidden, she definitely means it!

VÏKÆ’s personal battles and empowerment are continually reflected throughout this recording, but just as importantly so is her songwriting and performance skills. “Landmine” cleverly stands out with the implementation of a rich gamut of lyrical architecture with the spelling out of words. It adds a captivating aura to an already mesmerizing banger of a track.

The EP closer, and title track, “Finelines”, takes an indiscriminate look at the destructive aftermath of overindulgence, hedonistic tendencies and lubricious relationships. The bone-deep beat and luscious melody represents an artist in full control of her sound.

On the whole, the EP crafts an incredible soundscape of rhythmic synths and determined beats, which is further elevated by the accompaniment of VÏKÆ’s profoundly flowing narratives, and an astonishingly spirited voice.

MORE ABOUT: Veronika Bell, better known as the singer-songwriter and musician, VÏKÆ, is a Ukrainian-born New Zealander, whose family left Kiev when she was a kid to escape the aftermath of the Chernobyl disaster. Once a classical piano student, as well as an aspiring opera singer in a Classical Performance program at University, Veronika soon felt boxed in and switched her studies toward to Contemporary Performance. Obtained a Bachelor of Music (Contemporary Performance Voice) and a Diploma for Graduates in Music (Jazz) in 2016 from The University of Otago. She became a resident vocalist of The Dunedin City Jazz Orchestra and began releasing her own music as well as managing her band VTMNK.

Next post The G.F. Bruce Band – “Tell Me Right Now”