Formed in Muskegon, MI during November of 2017, by, Paul Jensen (Drums, Electronics) and Addison Eilers (Guitar, Bass, Vocals), Tiny Tree is a powerhouse duo who blend heavy metal and post-punk aesthetics with the ambience and tonal exploration of post-rock. On their latest EP release “The Road”, the duo manage what many often think is impossible for a predominantly instrumental band: to be all things to all people and successfully communicate a veritable slew of emotions and moods with only shreds of vocals and lyrics. Their particular brand of thick, swollen, metal-infused guitar riffs and thundering drum complexity that often threatens to blow the roof off the room to finds them in stunning form here. 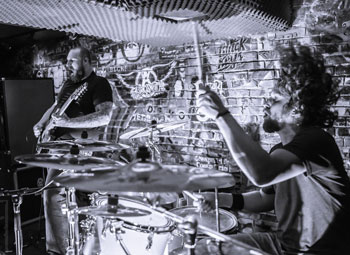 This is a record that unfolds, splits and rebuilds, before unfurling into ever grander and further spiraling creativity, as it pushes and pulls against itself creating pockets of electrifying atmosphere that the sparse trappings of melody fall helplessly into.

Musically linked, as it is, the flow from section to section within the two tracks, “Amphibious” and “The Road” is what makes the EP such an immersive listen, and a perfectly executed recreation of their crushing and sensory-overwhelming performances that’s been expertly captured on record.

In an attempt to dig out any hidden meaning in the song titles, these songs illustrate what’s so important and alluring, about what can be considered principally instrumental music; it’s easier than ever to make your own interpretation of the tones, textures and emotions that are being communicated.

And even if there are lyrical narratives in both of these songs, Tiny Tree’s storytelling is cryptic, and malleable enough to be personally interpreted, for which the music is all the better off. Which of course makes the recording a masterwork in the art of emotional communication through musicianship.

From the opening, eight and a half minute track, “Amphibious”, one gets the feeling that despite its chilling and crushing darkness, the EP serves to inspire and uplift – a true reflection of the human experience. Addison Eilers’ versatility as a guitarist easily rivals any of his contemporaries, as Paul Jensen delivers his incredibly discerning and effective drumming.

By the time they have built the opening song to an apex, both players are running on overdrive with grinding riffs and thumping beats. Their performances, much like their dynamic songwriting approach, is full of peaks and valleys, filling “Amphibious” with atmosphere and dynamism.

The almost fifteen minutes of “The Road”, presents itself as an epic opus on its own. Fans will love Tiny Tree’s scenic, cinematic style, as they blaze their own trail, with tribal rhythms, pulsing bass-work, thudding drums and sludgy riffs.

There are incredible riffs here that feel like they’re extending what Tiny Tree are capable of, almost adding a new depth to their already explosive dynamic ability. The Muskegon outfit’s impeccable ability to create and control tension before releasing that energy through expressive outbursts and epic progressions is the defining element that distinguishes Tiny Tree

Blissful and sedate atmospheres blend with aggressive rhythms and murderous riffs that are brilliantly laced together by vivid, interweaving, harmonic passages in a marauding, inundating wall of sound. “The Road” – both the song and the EP, as a whole – is a pythonic portrait of sound, conjuring foreboding dimensions in the minds of those who listen. Tiny Tree sound both vital and dazzling in what they do. 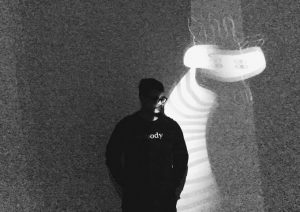 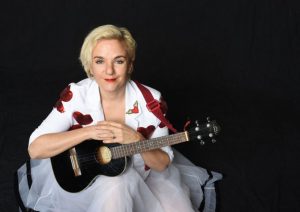