“Destroyed” is a brand new version of band’s older song. The single features a guest drummer – Nik Hughes – a drummer of Bush. Mixing was done by Marshall Gallagher a leader, lead singer and guitarist for Teenage Wrist. And finally mastering was done at Howie Weinberg Mastering. Whichever music style and band you’ve liked over last 30-40 years anything you pick you would probably pick something Howie Weinberg was involved in making. None of the people involved in production of this single need to be introduced. The song is about how sometimes things come real bad in life. The band filmed a also a new video for the song. “Destroyed” is a first single a new album coming out in the first half of 2023 with more guest artists, producers and good music. Tune in to Snakedoctors please. 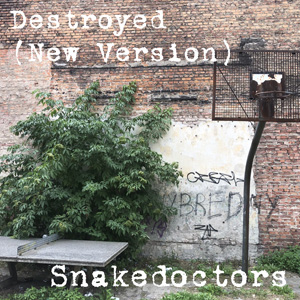 Snakedoctors are four friends who started the band in Gdansk, Poland in May of 2020. Since then they released twenty two singles (including a Christmas special and a song in Czech under name Jiri Blaha & Framuga Boys) and four albums: „Obligation”, „Joy Free Bowl”, „Mellow Joy” and “Four and a half”. Albums charted at Poland Empik Top 100 Rock, iTunes Top 100 Rock and one of UK’s independent radio album chart.

Their biggest hit single so far – „Close That Door” has been a number one for over 30 weeks in Poland at Radio Olsztyn Top 40 and also at Radio Ostrowiec Top 20. That success was followed by “Too Many” at no. 1 at Radio Olszyn Top 40 and also at Radio Ostrowiec Top 20 as well as “Crime Story” at no. 2 at Radio Ostrowiec Top 20. Another one – „Got Him Another Girl” reached number one at radio airplay chart for Central America (CMEAN). “Snake Doctor” lasted for a few weeks on Japan You Tube Top 100 songs and at no. 2 at radio airplay based chart in Central America. “Friday Night” charted at one of US Spotify Charts (Local Pulse – LA). All singles charted at Poland iTunes Rock Top 100 (many of them reached number one), one of the indie radio charts in the UK (including four number ones – „A Song”, „Tinder Girl”, “Crime Story” and “Wuss”) and other radio charts in the US, Columbia, Ecuador and Peru.

Snakedoctors songs get the airplay in many countries worldwide and on 5 continents. The same applies to reviews that their albums and singles receive. Their previous  albums featured a lot of great artists and producers including – Joe Gibb (Depeche Mode, The Cure, The Kinks, Jane’s Addiction, Stone Roses and The Mission), Kevin Paul(also Depeche Mode and the Kinks and also with Yazoo, Erasure and David Bowie), regulars from Abbey Road Studios (Chris Bolster) and Metropolis Studios (Andy “Hippy” Baldwin), Corey Coffman from band Gleemer,

Corey Alley (Hobbit Hole Records), Matt Gerhard working with band Spoon, Dawid Gorgolewski of Osso Studio (Poland), Tom Queyja (The Lip Studio) – a long time friend of Snakedoctors’s leader who had produced songs for his former US band’s (the Implants formerly known as the Shriners) album.  Their videos were filmed in Poland, Ukraine, Germany and Indonesia. The also like to invite guests and their songs featured to name a few: Catlea (US), Vistory Vizhanska (Ukraine), Christine Corless (US) and Ada Nike (Poland).

Their new 2003 album with working title “Waiting For” will bring more great songs and feature many surprise appearances and producers they had a chance and luck to work with. It will be out in the first half of 2023. As they say – they play music because it’s fun. It’s an indie band releasing their music on indie label Case Studio. Band’s albums are distributed by MyMusic.