Fueled by creative fire, an acute vision, and an industrial-heavy electronic song, where techno meets alternative rock, H2SO4 untap whatever pent up angst they have, turning thumping fervor into something absolutely worth dancing to on “Hey Stupid” Without trying to replicate the aesthetics of their electronic contemporaries, H2SO4 simply vibrate at a different frequency. The synths snarl and spit their sounds, daring you to get involved with the rhythm, instead of simply being a passive bystander. Ultimately, H2SO4 summon lovers of boisterous commotion and adrenaline-pumping soundscapes to awaken their deep-thinking, inner party monster.

Starting out on a spoken word intro, “Hey Stupid” explodes into life with an  salvo of echoed vocals, a kick drum motif and a steady bass, before progressing to the momentum-inducing ingredients of slamming percussion, and synth lines that buzz and grind like thrashing power cables. It’s the point on the single when all of the confrontational sonic elements thrillingly amalgamate to create something that sounds genuinely exiting and unpredictable. 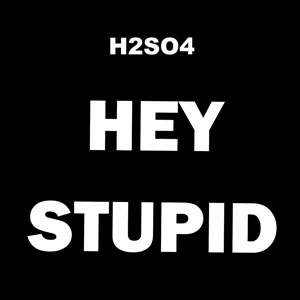 In fact “Hey Stupid” creates the type of perfectly judged sonic onslaught that is going to sound positively seismic when slotted into a live set. This song must stand up as one the fiercest and hard-hitting electronic tracks I’ve heard this year, with a blazing beat and jagged synths that will enthrall a sweaty multitude of dancing crowds. Full of alternative potency and escalating, frantic keys, “Hey Stupid” builds to an upbeat euphoric rave-up.

Intensity and suspense surge through the chunky track, as the heavy rhythm punches through the distorted electronic noise. Above it all, the vocals search and soar, weaving between the heavy doses of raw energy, devastating power.

“Hey Stupid” is a welcome blast of high octane bombast that underlines H2SO4’s status as fresh electronic music royalty. Filled to the brim with ingenious hooks and a huge pile of character there is hardly a chance that this track would, or could ever be, overlooked, if it hit your sound system.

Across the board everything H2SO4 put into this record is phenomenal, compared to what’s happening on the electronic scene right now. This is the sound of the past and of the future, happening right now, and the excitement of it all seeps through on every bar.

A steady beat plows its way throughout this song as inspired synth lines thrust their way into the listener’s ears. It’s all incredibly effective. It’s loud, it’s in your face, and pulverizing in an alluring manner.

Regardless of the genre, this is a track that will appeal to just about everyone who likes forward-thinking alternative music. “Hey Stupid” is attention grabbing with an overall addictive quality. Never too self-indulgent, this is a smart, strong and thoroughly enjoyable track, armed with an arsenal of sonic weapons and vocals to combat the mundane forces of current mainstream music.

Electronic music can often be a pretty repetitive copy and paste affair. Then there are those artists who bleed with passion and energy, pushing the boundaries of the genre. H2SO4 belong to this latter group. 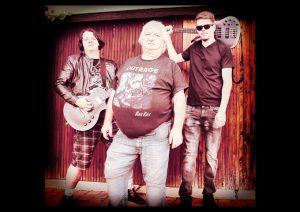