Die Robot is an electro-industrial band from Portland, Oregon. The project formed during the summer of 2012, when former members of Pop Dolls, Vince Christian, lead vocalist, and Barbie Saint – who provides bass, guitar, and synthesized leads simultaneously, via customized gear designed for her by Retro Mechanical Labs – moved to Portland where they met drummer, Angela Johnson. The band is completed on this project by keyboardist Uriel. Die Robot shared the stage with artists like, John 5 and The Creatures (Rob Zombie, Marilyn Manson) Conjure One (Front Line Assembly, Delerium) Vince Clark (Depeche Mode, Yazzoo, Erasure) David J (Bauhaus, Love and Rockets) Orgy, Unter Null, 16Volt, Kite, and many others.

Die Robot is currently completing work on its brand new EP “Technopunk”, and have in the meantime released two singles taken from the upcoming collection – “Virtual Life” (Single) and “Armed Forces” (Maxi Single). Pounding industrial beats are coupled with drum & bass breakdowns, power chords are coupled with lush melodic electronics, and it all works without diluting the band’s core sound.

This powerful musical backdrop seems to push Christian to do even more with his vocals. This is evident on “Armed Forces” where the lead singer catapults his voice into a state of guttural power play. The listener can only surrender and get carried through the production’s ruthless sonorities.

After the unstoppable rhythm and synth-driven opening of “Virtual Life”, a lugubrious melody goes hand in hand with excruciatingly rampant vocals that makes the skin crawl with excitement. The track turns into a driving piece where the harsh synths are matched by the violently manipulated vocals and the anthemic refrains, dispatched throughout the song.

The whole formulaic nature of electro-industrial music has spawned some truly dreadful, bargain-binned items for far too many years. Hence its tracks like these that promise to take the genre out of the doldrums and into a brighter new future. 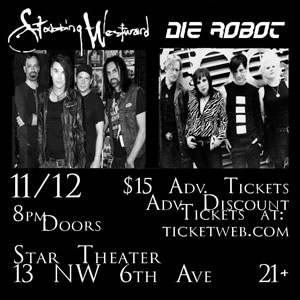 So where does Die Robot’s technological arsenal take us? Well, I must admit, my first listening was pleasurable. The band’s broad complexity of arrangements and sparking brutality is tempered just right to produce a highly crafted, expertly-honed musical experience. And after two, three, and four complete spins, the rich textured hybrid of electronic sounds begin to yield some real volatility, on both “Virtual Life” and “Armed Forces”.

The tracks, whilst being an ‘immediate’ listen, are ones which subsequently shed their polished underbellies with time spent – a good sign for those fans who appreciate the shelf-life durability of their music, as opposed to one-listen throwaways.

Die Robot will be one of those bands that draw attention to the whole electro-industrial music phase that is attempting to drive the electronic music scene once again. They have really gone in depth to merge a sound that is both aggressive and catchy.

NOTE: Die Robot will be playing with Stabbing Westward Nov. 12 at the Star Theater and they will release “Technopunk” – the EP there, including four new songs, remixes and live videos. Worldwide release will be Nov. 25 and Technopunk the full album is schedule to come out at the beginning of 2018.