I’m starting to think CONVEY can do no wrong.  Their new single “Speed Dial” is indeed an obvious continuation from “Nothing But a Love Song”, but it has evolves directly from its predecessor. The creative juices just keep flowing, and I have the feeling that CONVEY aren’t anywhere near their desired musical plateau yet. Not at all. 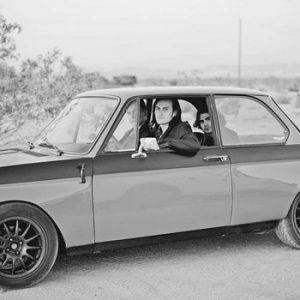 They are like Led Zeppelin invaded by The Muse on a psychedelic trip to the stars, only they’re not even from the same planet. This band is a veritable force of nature in contemporary rock music…and they’re only on their second single!

“Speed Dial” grabs the listener and does not let go until the end – a remarkable achievement of sustained intensity (once again) unlike anything most other bands are recording now. The emblazoned soundscape etches out 3 dimensions of music on this track, as these cats sculpt some of the most intricate and complex sounding networks of interlaced melodies and rhythms that could possibly be conceived by rock musicians.

And something about the high-pitched strident vocals and the angular, guitar-driven rhythms, that members, Ben Cohen, Jahan Rajabi and Cory Jurkiewicz deliver, are immediately captivating.

CONVEY breeze through the vocals so effortlessly and brilliantly, and so astonishingly that I forget to even listen to the lyrics. Which is a shame considering that I can figure out their storytelling has a definite profoundness attached to it. It’s just that the lead vocal is so piercingly muscular and ethereally beautiful I cannot get past admiring the notes being sung. And I have tried more than once, but keep losing myself halfway through the track.

Right from their debut single, “Nothing But a Love Song”, CONVEY introduced wonderful and unexpected bits of music and melody, teasing the listener into wanting more. Here, they repeat the formula giving the listener exactly what they want, but don’t expect.

CONVEY manage to distill into a stellar work of 4 minutes and 40 seconds, decades of the most innovative and powerful traditions in rock music. The band has shown on both their releases so far, that you can go outside of  the listener’s usual comfort zone and still make infectious music that doesn’t compromise artistic integrity – actually, CONVEY distinctly promotes artistic integrity.

Now that this band has again fully aroused my interest in their evolution, I’m intrigued to see where they will go from here.