Award-winning Canadian rock band, Across The Board (ATB), releases their newest album “SONIC BOOM” – an eight track collection of infectious pop rock songs that chronicle the breaking of a rock band and the highs and lows along the journey to success. This is ATB’s second full length album, on the heels of their EP “AMENDS” and cross-Canada tour this past year. Produced and recorded in Toronto by MC2 Music Media, the album pays homage to the determination and drive it takes to achieve success as a band, and doesn’t fail to tell the truth about the rejection and indifference that can plague such a path. 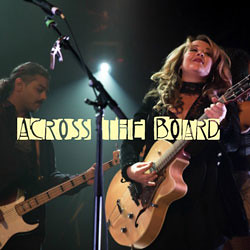 Fronted by Toronto physician/musician Jacqueline Auguste, the album was written and conceptualized by Auguste during the band’s cross-Canada train tour from Toronto to Vancouver and back last summer. “I imagined what it would really take to make it in this music industry”, shares Auguste, “–not only the sheer strength and unrelenting work we need to make a mark amidst all the noise, but the importance of writing great music that resonates with our fans.”

Auguste and her life partner Andy Ramjattan (bass player for the band), founded the group in 2013 out of a desire to move their garage and back yard jams to social media. They created a popular cover webseries, “Pick Up & Play” now in its 5th season on YouTube, and decided to take their show on the road with the debut album “JANE ON FIRE”, released in June of 2016. Since then, Across The Board has played to sold-out crowds across Ontario, and from Newfoundland to Vancouver. Recipients of four international music awards for work on “JANE ON FIRE” and “AMENDS”, ATB is set to take off yet again on tour this spring and summer across Southern Ontario and into Quebec and the Maritimes with “SONIC BOOM”.

Having received national and international terrestrial and college radio play for their original songs from both previous major releases, “JANE ON FIRE” and “AMENDS”, Across The Board is excited to share their newest work “SONIC BOOM” with audiences in Canada and beyond in hopes of continuing to promote Canada as a major creative force on the international music scene.

Across The Board is on radio rotation with the tracks “Sonic Boom” and “It Shouldn’t Be This Hard”. 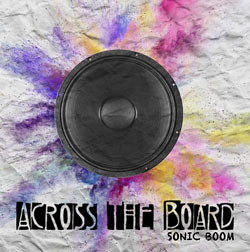 Hear us on Soundcloud: https://soundcloud.com/across-the-board-music

Check us out on Reverbnation: http://www.reverbnation.com/acrosstheboardmusic

Patronize us at Patreon: http://patreon.com/acrosstheboard

Buy our tunes at BandCamp: http://acrosstheboardmusic.bandcamp.com

Playlist us on Spotify:

Tweet
InAcross The Board, It Shouldn't Be This Hard, Sonic Boom